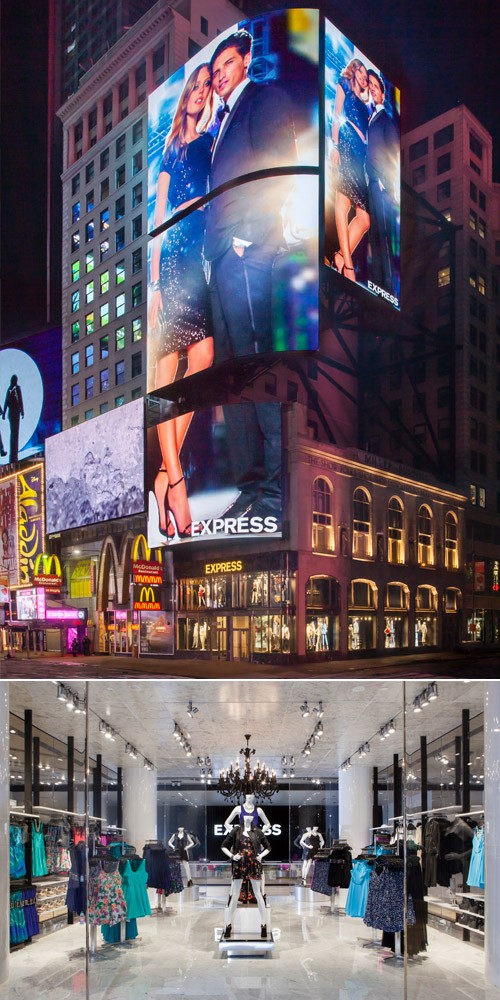 NEW YORK, NY—Sometimes, in order to look ahead, you need to look back—especially in the case of the new 33,000 square foot Express flagship in Times Square. With Shawmut’s help, Express has given new life to one of New York’s great landmarks: the iconic I. Miller Building, former home to the “Show Folks Shoe Shop.”

Working on any historic site is always a challenge. Having one GC (Shawmut) work on the interior while another GC simultaneously works on the exterior takes things to a whole other level. In order to maintain the schedule and avoid delays, Shawmut’s project teamheld a meeting every Monday morning with the client, landlord, members of Shremshock Architects & Engineers, the second GC, and, at times, the Landmarks Preservation Commission. The team would determine what items were of critical importance, decide the best course of action, and then take it. These briefings, combined with many off-hour shifts, helped mitigate any chance of the two general contractors literally tripping over each other.

The result is nothing short of spectacular. The seamless fusion of young (the dazzling 150-foot-high LED billboard on the roof) and old (the newly renovated, nearly 90-year old building) makes the Express flagship really stand out—no small feat when you’re talking about a store in Times Square!