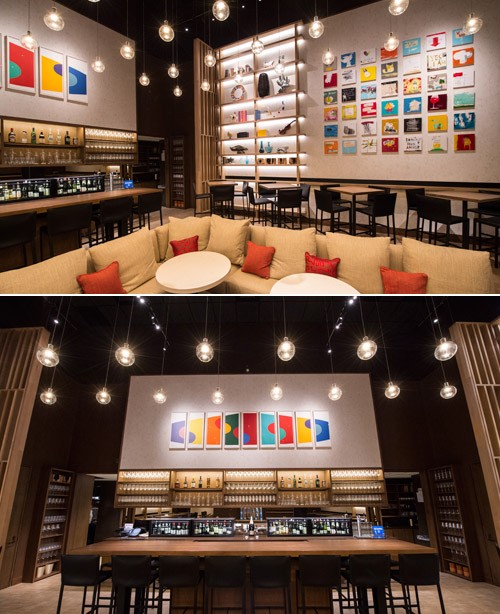 NEW YORK, NY—How lucky are we? Shawmut has now partnered with Eric Ripert and his internationally acclaimed NYC restaurant Le Bernardin—not once, but twice on their reinventions. Le Bernardin has held four stars from The New York Times for the longest period of time—28 years.

In 2011, Shawmut teamed up with Bentel & Bentel on Le Bernardin's restaurant redesign and this year the team did it again with Le Bernardin's Aldo Sohm Wine Bar and private banquet space, Privé.

Privé was created to help accommodate Le Bernardin's growing demand for private. The 9,500 sf Privé can seat 170 and features a staggered millwork paneled ceiling, fabric-wrapped operable wall that can separate the space into two rooms, and an aluminum fin wall that mimics the design of Le Bernardin.

Aldo Sohm, Le Bernardin's sommelier and namesake of the casual wine bar and lounge, emits a living room feel with an oversized couch and bar. An eclectic mix of artwork, books and vintage toys line extra tall backlit bookshelves. What you won't see, however, are the AC units that service both Aldo Sohm and Privé. The units were painstakingly fitted within an enclosed mezzanine and took several months of mechanical engineering.

From pre-construction all the way to the charcuterie, Le Bernardin and its patrons expect nothing less than perfection. And we're proud to say, they've received it.