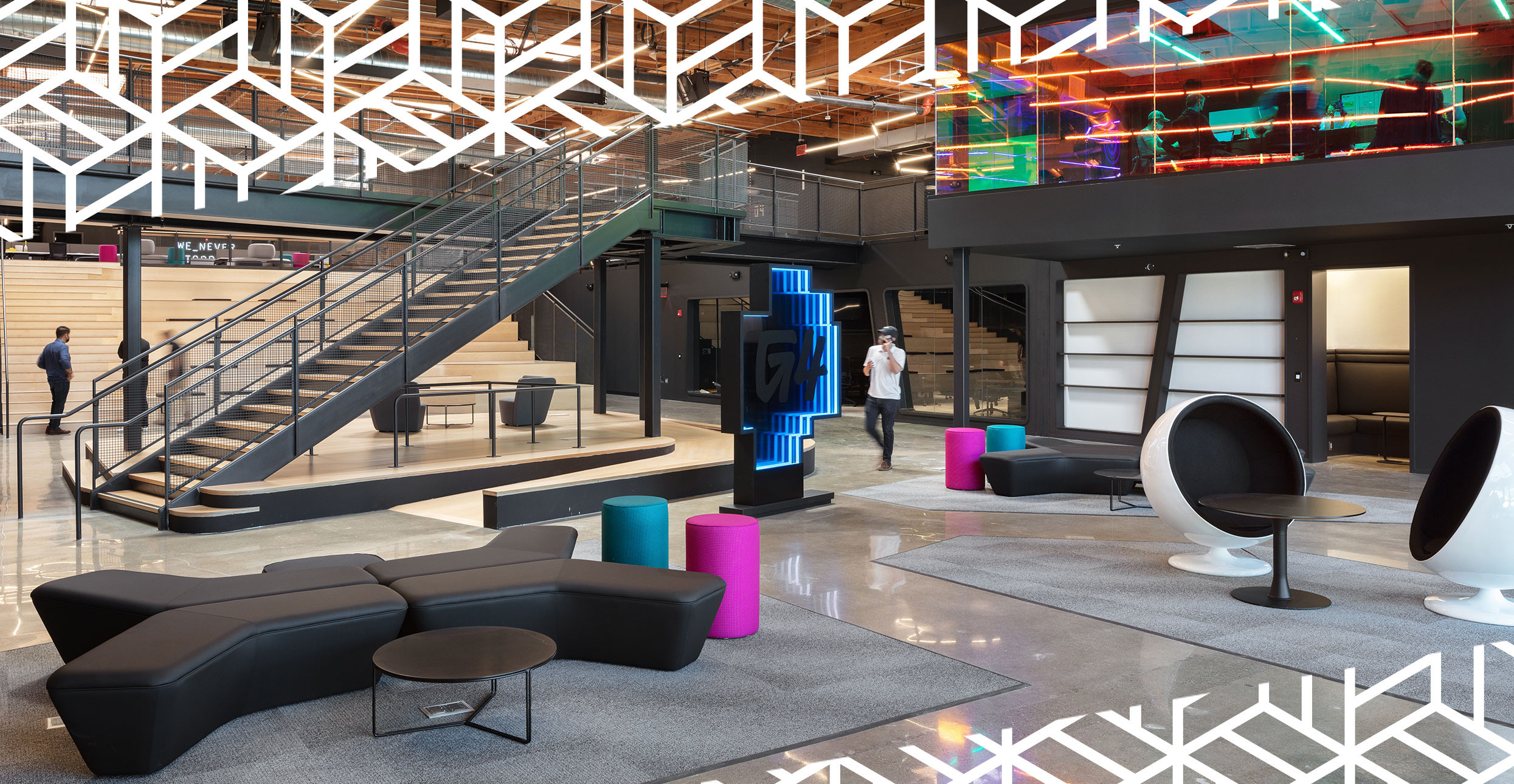 Comcast Spectacor has partnered with global architecture firm Populous to create a radical new home for its G4 digital and television network office and studio broadcast space. The new G4 headquarters is a revolutionary reimagination and redevelopment of a historic studio building that once housed the TMZ and Inside Edition studios.

Boasting an aesthetic that blends a 24/7 broadcast studio, multiverse-ready collaborative workplace, and professional gaming environment for an industry-defining new building type. The 67,000-square-foot G4 studios in Burbank, CA, built by Shawmut Design and Construction, are designed to take a starring role as the network premiers on November 16, 2021.

“The new G4 headquarters will provide our creators with state-of-the-art equipment and empower them to create content that unites fandoms across comedy, gaming and pop culture,” said Russell Arons, President, G4. “The building will serve as a resource and inspiration for our incredible team of creative and highly-skilled personalities to propel G4 into the future."

G4’s new studio facility design was created by Populous and its team of design and branding professionals to embrace the G4 brand and its commitment to the culture of its employees and its content consumers. The details, such as the original wood ceiling and colorful, graphic and bold artwork that includes hidden visual messages come together to represent the brand, while the sum of the parts creates a studio experience unlike any other.

A grandstand that can serve as a backdrop for shoots and a bridge that connects the two levels of the mezzanine for a panoramic view of the space set G4 studios apart as an interactive headquarters with locations for content-capturing at every turn. Visual markers throughout the entire space act as a nod to the G4 brand and create a rich, immersive and adaptable universe for visitors, employees and on-air personalities.

“Our experience designing the places where people love to gather translated seamlessly to this project which will serve as a lead character across G4’s programming schedule,” said Brian Mirakian, senior principal at Populous. “We had the privilege of working as part of a team that understands the value of design as a driving force in communicating and growing a brand that is embracing and re-shaping the way we consume content. The workplace is in a historic period of evolution and G4 studios will bring its employees unrivaled day-to-day experiences while setting a new standard for design in the broadcast and esports sectors.”

“The G4 culture is all about gaming, pop and fandom culture and the team at Populous translated its forward-thinking design concepts to reimagine these studios as a stand-out facility at the intersection of real estate, broadcast media and gaming,” said Joe Marsh, Strategic Advisor, G4. “The environment helps us bring the G4 universe to life and invite it into people’s own homes in a new way.”

Highlights of the process and the project include:

Every aspect of the G4 studios experience has been designed to set the stage for the next generation of content consumption. From sophisticated daily broadcasts to flexible workplaces, to professional esports training and events, G4 Studios accommodates myriad needs. A 100-seat grandstand provides space for collaborative gathering and event space while the lobby experience includes a lifesize G4 metaglyph and immersive VR gaming pod.

“Working in a design-led design build collaboration with Populous, our team carefully considered each aspect of the building and technology systems, providing input into means, methods, and materials to ensure the best final product for G4 and Comcast Spectacor,” said Vincent Spataro, senior director, Shawmut Design and Construction. “Our team’s cross-sector expertise—including workplace, esports, and content creation studios—allowed for the redevelopment of this historic studio building into an industry-leading, multi-disciplinary space.”