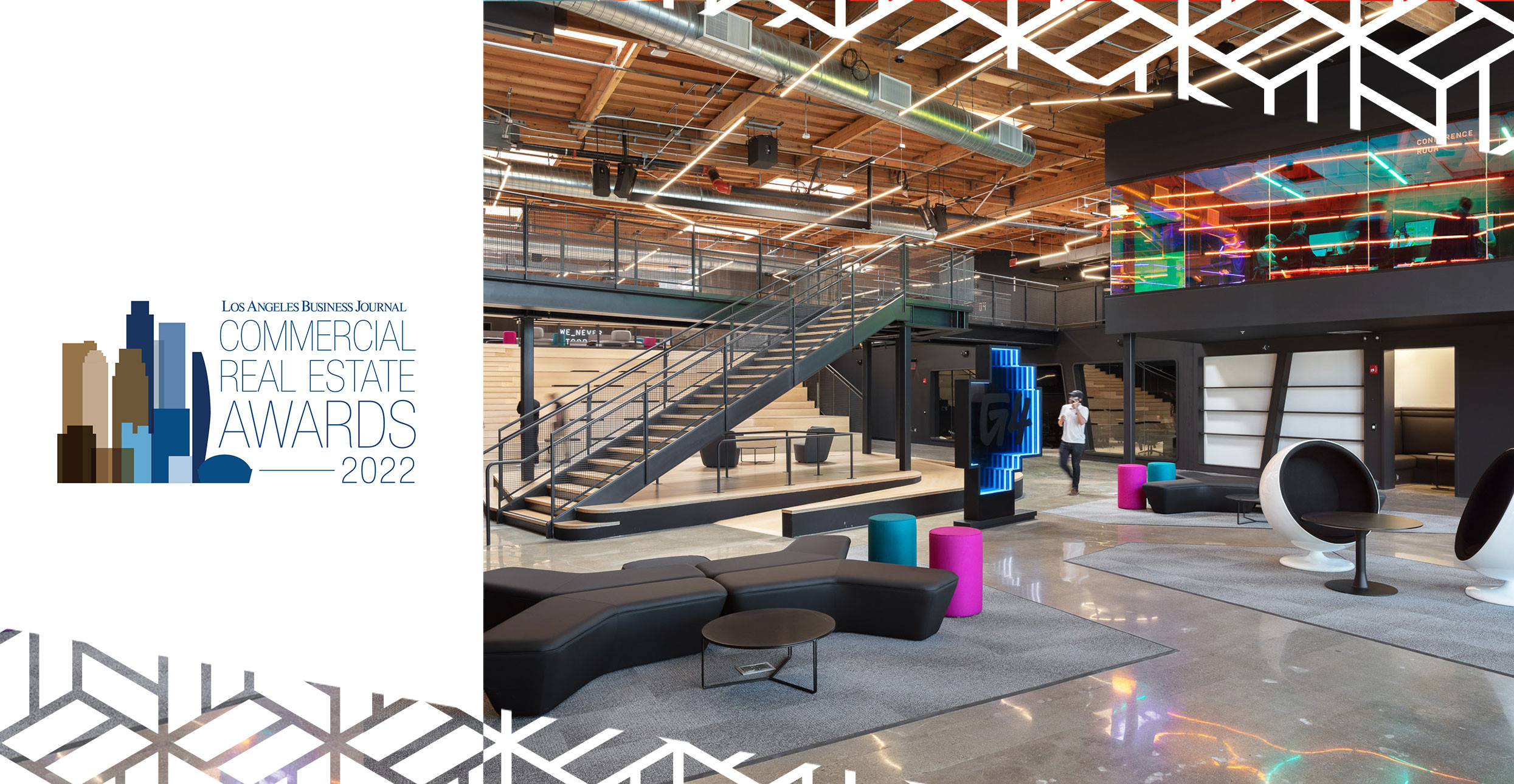 The new G4 headquarters is a revolutionary reimagination and redevelopment of a historic studio building that once housed the TMZ and Inside Edition studios. The radical new home for Comcast Spectacor’s G4 digital and television network is a first-of-its-kind facility consisting of 40,000 square feet of workplace environments, 15,000 square feet of broadcast production facilities, and 5,000 square feet of esports training and gaming spaces.

Boasting an aesthetic that blends a 24/7 broadcast studio, multiverse-ready collaborative workplace, and professional gaming environment for an industry-defining new building type, the studio has a distinct identity and plays a leading role in the evolution of the G4 brand. The headquarters provides G4’s creators with state-of-the-art equipment and empowers them to create content that unites fandoms across comedy, gaming, and pop culture.

G4’s new studio facility design was created to embrace the G4 brand and its commitment to the culture of its employees and its content consumers—combining the amenities of a futuristic office space with the high-tech nature of today’s content distribution and consumption. Details such as the original wood ceiling and colorful, graphic and bold artwork that includes hidden visual messages come together to represent the brand, while the sum of the parts creates a studio experience unlike any other.

A grandstand that can serve as a backdrop for shoots and a bridge that connects the two levels of the mezzanine for a panoramic view of the space set G4 studios apart as an interactive headquarters with locations for content-capturing at every turn. Visual markers throughout the entire space act as a nod to the G4 brand and create a rich, immersive and adaptable universe for visitors, employees, and on-air personalities.

G4’s new headquarters not only provides a gathering place for its employees, but for the local gaming community. The space sets a new standard for design in the broadcast and esports sectors, creating an immersive experience for gamers, fans, visitors, and staff. The environment helps bring the G4 universe to life and invite it into people’s own homes in a new way—both virtually and in-person.

Every aspect of the G4 studios experience has been designed to set the stage for the next generation of content consumption. From sophisticated daily broadcasts to flexible workplaces, to professional esports training and events, G4 Studios accommodates a myriad of needs.

Designed and constructed entirely during the pandemic—with a non-negotiable deadline aligning with G4’s network premier on November 16, 2021—there was a potential for severe supply chain issues and other significant delays. However, since this was a design-led design-build collaboration between Populous and Shawmut Design and Construction, all key stakeholders were part of the project development process from the outset—at the table together since day one—allowing for real-time feasibility and constructability reviews. The team reviewed scope, budget, and schedule from concept to completion, carefully considering each aspect of the building, its technology systems, and all materials used in the renovation, allowing the team to estimate costs and timing more accurately at every phase.

This ambitious facility is a testament to the remarkable virtual collaboration between client stakeholders, project designers, and construction managers all while working remotely.

The G4 headquarters is a modern-day example of reinventing existing infrastructure for its highest and best use. By adaptively reusing the existing 1960s era studio building, the environmental impact was far less than a standard ground-up mixed-use studio and office building. Through a design-led design-build collaboration, the teams were able to review technology systems and all materials upfront, reducing excess material orders by establishing precisely what was needed at each phase of the project.